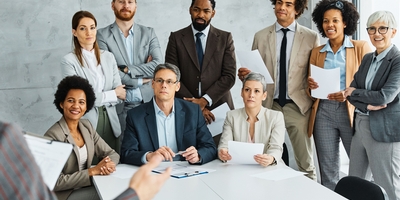 In researching his new book, The Bezo Blueprint: Communication Secrets of the World’s Greatest Salesman, Carmine Gallo identified common tactics transformative leaders use to effectively communicate their messages.  Several include:

Using short words to talk about difficult things.  Make it as easy as possible to understand your message by using short words and short sentences.  Software tools such as Grammarly can help.  Your messaging should be understood by someone with an eighth-grade education.  Sophisticated arguments should be easy to grasp.  Your ideas should be easy to understand. Gallo notes that most of Jeff Bezo’s shareholder letters were written for an eighth- or ninth-grade level.

Using sticky metaphors to reinforce key concepts.  Metaphors provide shortcuts to communicate and understand complex information in short, catchy phrases.  America’s foremost investor, Warren Buffet, is a master of using metaphors to convey a point.  In 1995, at a Berkshire Hathaway meeting, Buffet explained, “The most important thing we do is to find a business with a wide and long-lasting moat around it, protecting a terrific economic castle with an honest lord in charge of the castle.”  Metaphors provide a roadmap for people to understand an abstract idea by searching for something that is familiar to make sense of an idea.

Humanize data to create value.  This requires placing numbers in perspective by converting data into words and phrases that people understand.  A classic example is how Neil DeGrasse Tyson put into perspective a proposed $3 billion cost to launch the Cassini space probe to explore Saturn.  He explained that when you spread the $3 billion over eight years, it costs less than Americans spend on lip balm annually.

Make your mission your mantra to align teams.  Earl Bakken founded Medtronic in 1957 following a power outage that left most of Minnesota and Wisconsin in the dark.  Working in his garage, Bakken invented the first battery-powered pacemaker that could keep hearts functioning even if the lights went off.  The company grew to more than 90,000 employees by the time of Bakken’s passing in 2018.  What did not change in the 50 years from the company’s start is the focus on its mission: alleviate pain, restore health, extend life. Bakken repeated this mission almost daily and made a simple request of his team members, “I ask you to live by it every day.”

A mission that works is repeated so often that it becomes a mantra.  Think Nike: Just Do It. When you communicate like a great leader, it become easy to inspire others.